Novartis Pharmaceuticals Corp. (NVS) was found liable by a federal jury for jawbone damage in a woman who took the drug Zometa, and she was awarded $10.45 million, a lawyer for the plaintiff said.

A jury in Central Islip, New York, returned the verdict this afternoon, several hours after they began deliberations in the case, said John Vecchione, a lawyer for plaintiff Barbara Davids.

The verdict, which couldn’t be immediately confirmed in court records, is the second-largest among similar cases over Zometa, Vecchione said. It is the fourth win for plaintiffs out of eight Zometa-related jawbone cases that have gone to trial, he said. The jury in the Davids case awarded $450,000 in compensatory damages and $10 million in punitive damages, he said.

New Cautions About Long-Term Use of Bone Drugs 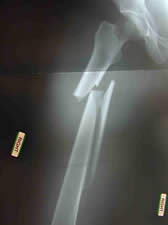 An X-ray shows a fracture in the femur of a woman who used Fosamax for seven years.

In an unusual move that may prompt millions of women to rethink their use of popular bone-building drugs, the Food and Drug Administration published an analysis that suggested caution about long-term use of the drugs, but fell short of issuing specific recommendations.

The F.D.A. review, published in The New England Journal of Medicine online on Wednesday, was prompted by a growing debate over how long women should continue using the drugs, known as bisphosphonates, which are sold as generic versions of brands like Fosamax and Boniva, as well as Novartis’s Reclast.

The concern is that after years of use, the drugs may in rare cases actually lead to weaker bones in certain women, contributing to “rare but serious adverse events,” including unusual femur fractures, esophageal cancer and osteonecrosis of the jaw, a painful and disfiguring crumbling of the jaw bone.

TORONTO — Health Canada is alerting Canadians that a class of drugs used for osteoporosis is linked to a slightly higher risk of a rare but serious thigh bone fracture known as an atypical femur fracture.

The advice is the result of Health Canada's review of bisphosphonate drugs, which has led to new warnings and precautions for patients and doctors and will lead to new labels for the drugs.

The department says the risk is higher for those taking the drugs, but the benefits of using the medications to avoid other osteoporosis-related fractures outweighs that risk.

They can occur with minimal or no impact to the thigh area, and can occur in both legs in the same person.

Health Canada says patients who are currently taking or who took bisphosphonate drugs previously and who notice new or unusual pain in the hip, groin or thigh should talk to their doctor as this may be a sign of an atypical femur fracture.

The U.S. Food and Drug Administration announced similar findings and warnings in a statement issued in October 2010.

Novartis AG (NOVN), Europe’s second-biggest drugmaker by sales, properly warned a Rhode Island man that Zometa, its bone-strengthening drug for cancer patients, could cause jaw damage, a company lawyer argued at the end of a trial.

Karlene Hogan sued Novartis in 2006 claiming her late husband, Timothy Hogan, developed so-called jaw death as a result of getting Zometa injections, according to the complaint. Hogan’s case is the fourth to go to trial over Zometa and Aredia, another Novartis bone-strengthening drug.

“The labels included the risks that were known and knowable at that time,” Bruce Berger, a lawyer for Novartis, told jurors in federal court in Brooklyn, New York, today in his closing argument.

Novartis, based in Basel, Switzerland, faces about 700 suits over the two medicines. The Hogan case is the fourth to go to trial. In November, a federal jury in Winston-Salem, North Carolina, ruled that Novartis should pay more than $12.8 million to a North Carolina woman’s family over claims Zometa and Aredia damaged her jaw. The award was reduced under state law to $1.26 million, including interest.

In October, a New Jersey jury rejected a woman’s claims that Aredia and Zometa caused her jaw deterioration. In October 2009, a Montana jury ordered Novartis to pay $3.2 million in damages to a cancer patient who made the same claims over the medicines.

If the jury rules against the company in the Hogan case, damages will be determined later. There is no possibility of punitive damages in the case. 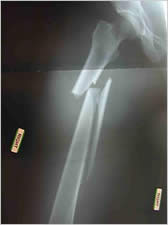 Novartis AG officials hid the health risks of the drugmaker’s bone-strengthening medicines Aredia and Zometa to protect billions of dollars in sales, lawyers for a North Carolina woman said.

Zometa and Aredia created a “giant money wheel” for Novartis, Glenn said in closing arguments of the trial of a lawsuit by Fussman’s family over damage done to her jaw. Novartis officials were prepared to do whatever it took to “keep the money wheel rolling,” the lawyer said.

The Fussman family’s lawsuit is the third product-liability case to go to trial over the bone-strengthening treatments. Last month, a New Jersey jury rejected a woman’s claims that Aredia and Zometa caused her jaw deterioration. In October 2009, a Montana jury ordered Novartis to pay $3.2 million in damages to a cancer patient who made the same claims over the medicines.

Bruce Berger, a Novartis lawyer, countered in his closing argument that the company provided adequate warnings about the risks the drugs posed to users. Fussman’s jaw problems were unrelated to her use of Zometa, he said. Fussman, who lived in Chapel Hill, North Carolina, died in 2009 of complications from breast cancer.

Novartis AG officials downplayed risks that the drugmaker’s bone-strengthening medicines Aredia and Zometa could destroy patients’ jaws, a lawyer for a woman suing the company told a North Carolina jury.

Officials of the Basel, Switzerland-based drug company got reports from doctors as early as 2002 that Rita Fussman and other cancer patients taking Aredia and Zometa to prevent bone loss during treatment suffered irreplaceable jawbone damage, Bob Germany, a lawyer for Fussman’s family, said in opening statements in a trial over the medicines. Fussman died in 2009 of complications from breast cancer.

Fussman’s family contends Novartis didn’t adequately warn that Aredia and Zometa could cause disfiguring jaw damage that forced cancer patients such as Fussman to subsist on baby food, Germany told jurors in federal court in Winston-Salem.

Patients and their doctors “were not told the whole story about these drugs,” Germany said. “In fact, we were not told half the story.”

The Fussman family’s lawsuit is the third product-liability case to go to trial over the bone-strengthening treatments, which had 2009 sales of $1.5 billion, according to Novartis’s annual report. Both drugs are still on the market.

TUESDAY, Oct. 12 (HealthDay News) -- A new study finds that cancer patients treated with bisphosphonate drugs such as Aredia or Zometa to reduce or delay bone complications from cancer may be at higher risk for the irregular heartbeat known as atrial fibrillation and for a related event, stroke.

In atrial fibrillation, the upper chambers of the heart beat chaotically, causing blood to pool and increasing the potential of clots, stroke, heart failure and death.

However, the bump up in risk with bisphosphonates was "relatively modest," said Dr. James Goodwin, senior author of a paper appearing online Oct. 12 in the Journal of Clinical Oncology.

At relatively low doses, bisphosphonates have been widely used for about three decades to treat osteoporosis, mainly in older women.

By David Voreacos and Jef Feeley

Oct. 6 (Bloomberg) -- A New Jersey jury ruled that Novartis AG, the Swiss drugmaker, provided adequate warnings about the risk of its bone-strengthening medicines, rejecting a lawsuit by a woman who claimed the drugs destroyed her jaw.

“There is not anything in this record to show that Novartis deliberately concealed anything,” Joe Hollingsworth, a company attorney, said in his closing argument today.

Bessemer’s suit was the second product-liability case to go to trial over the bone-strengthening treatments, which had 2009 sales of $1.5 billion, according to Novartis’ annual report. Both drugs are still on the market. Last year, a Montana jury ordered Basel, Switzerland-based Novartis to pay $3.2 million in damages to a woman who blamed the drug for damaging her jaw.

Gloria Vanderham, a U.S.-based spokeswoman for Novartis, didn’t immediately return a telephone call for comment about the verdict.

Bessemer, of Brielle, New Jersey, sought unspecified damages for her pain, suffering and loss of enjoyment of life. Her husband, Allan, 75, sought damages for his loss of consortium, society and services.

Novartis executives knew as early as 2002 that Jane Bessemer and other cancer patients taking Aredia and Zometa to slow bone loss during treatment may suffer irreplaceable jawbone damage, Bob Germany, a lawyer for the plaintiff, said in opening statements in the trial of Bessemer’s lawsuit over the medicines.

Bessemer and other patients wouldn’t have suffered disfiguring injuries if officials of Basel, Switzerland-based Novartis “had told the public what they knew” about the drugs’ risks, Germany told jurors in New Brunswick, New Jersey, today.

Bessemer’s suit is the second product-liability case to go to trial over the bone-strengthening treatments, which had 2009 sales of $1.5 billion, according to Novartis’ annual report. Both drugs are still on the market. Last year, a Montana jury ordered Novartis to pay $3.2 million in damages to a woman who blamed the drug for damaging her jaw.