Statins Linked to Raised Risk of Cataracts in Study

Statins Linked to Raised Risk of Cataracts in Study

THURSDAY, Sept. 19 (HealthDay News) -- The statin medications that millions of adults take to lower their cholesterol levels may also raise their risk of developing cataracts, a new study suggests.


This is the latest of several studies looking for a link between statins such as Lipitor and Zocor and cataracts, a clouding of the lens of the eye. The results to date have been conflicting and inconclusive, the researchers note.


"Cataracts are a main cause of poor vision and blindness, specifically for the elderly," said lead investigator Dr. Ishak Mansi, of the VA North Texas Health System in Dallas.


"This study cannot identify that statins cause cataracts; rather, it identifies statin use as associated with a higher risk of being diagnosed with cataract," he added.


The report, published Sept. 19 in the online edition of JAMA Ophthalmology, involved almost 14,000 men and women, 6,972 pairs of statin users and nonusers, who were seen by the military health care system from October 2001 to March 2010.


Those taking statins had a 27 percent increased risk of developing cataracts compared with nonusers, the researchers found.

Focusing on almost 500,000 Ontario residents, researchers in Canada found that the overall odds of developing diabetes were low in patients prescribed statins. Still, people taking Lipitor had a 22 percent higher risk of new-onset diabetes, Crestor users had an 18 percent increased risk and people taking Zocor had a 10 percent increased risk, relative to those taking pravastatin (Pravachol), which appears to have a favorable effect on diabetes.

Physicians should weigh the risks and benefits when prescribing these medications, the researchers said in the study, which was published online May 23 in the journal BMJ.

People taking the cholesterol-lowering medication Zocor should be aware they may be at risk for muscle problems if taking a high dose or using certain other medications and foods.

Health Canada said Tuesday that people taking Zocor or simvastatin within the recommended dose range are at increased risk for two muscle problems.

Zocor is used to lower the levels of cholesterol and triglcerides in the blood. (Mel Evans/Associated Press)

The drug, which is also available in generic forms, is used to lower the levels of cholesterol and fatty substances called triglycerides in blood and to reduce the health risks associated with coronary heart disease, the department said.


Those taking 80 milligrams of the medication are at increased risk of rhabdomyolysis — a type of muscle injury that in severe cases can lead to kidney failure or death — particularly in the first year of treatment, Health Canada said in a letter to health professionals. Those patients may also be at risk of myopathy, a type of muscle weakness.

You may be surprised to learn that in 2011, the Food and Drug Administration received 179,855 reports of serious or fatal adverse drug reactions. This was an increase of 15,386 reports (9.4 percent) from the 2010 total. Reports reached the FDA through two mechanisms. Voluntary reports from health professionals and consumers and reports from manufacturers. There were 21, 002 voluntary reports and 158,853 from manufacturers. Manufacturers must report serious events within 15 days of becoming aware.

The 10 drugs with the largest numbers of reports sent directly to the FDA by healthcare practitioners and consumers in 2011 in order of frequency are Pradaxa, Coumadin, Levaquin, Carboplatin, Zestril, Cisplatin, Zocor, Cymbalta, Cipro and Bactrim. Keep in mind that this is not a scientific study of the frequency of adverse drug events in clinical practice. These are the medications that health professionals and consumers told the FDA were causing serious and fatal side effects during 2011. It is interesting to note that just two of these drugs were first introduced in the last decade (Pradaxa and Cymbalta), and only one in the previous year (Pradaxa), suggesting that major drug safety issues are not confined to recently approved drugs.

Pradaxa surpassed all other monitored drugs in several categories, including overall number of reports (3,781), deaths (542), hemorrhage (2,367), acute renal failure (291), and stroke (644). It was also suspect in 15 cases of liver failure. Coumadin has been prominent in the rankings for many years. It accounted for 1,106 reported ADEs overall, including 731 reports of hemorrhage and 72 deaths.

Zocor, also known as simvastatin, is widely available as a generic drug and is also sold in combination with ezetimibe as Merck's Vytorin and niacin as Abbott's Simcor.

The highest approved dose of 80 mg should be used only by patients who have been taking it for 12 months or more without any evidence of muscle injury, the U.S. Food and Drug Administration said on its website.

"We do not see much impact here given the fact that relatively few patients were being started at this high dose," Merck Chief Medical Officer Michael Rosenblatt said.

"Most doctors were already aware that there was a disproportionate number of muscle side effects at this dose. And most of it is generic any way for simvastatin," he added.

The FDA also requires changes to the drug label to add new contraindications and dose limitations for using the drug with certain medicines.

Patients taking Zocor 80 mg daily have an increased risk of muscle injury compared to patients taking lower doses of the drug or other drugs in the same class, the FDA said.

The list, which comes out quarterly, covers safety issues that the FDA flagged between April and June and was released on the agency's website on Friday.

In most cases, the FDA offered few clues into what the concerns were and simply said the agency "is continuing to evaluate this issue to determine the need for any regulatory action."

Johnson & Johnson's (JNJ.N) Nucynta, a pain treatment, was also listed as having a risk of convulsions, hallucinations and serotonin syndrome.

FDA also named omeprazole products, used to treat ulcers, saying there is a risk the drug could cause low levels of magnesium in the blood.

The drug manufacturers were not immediately available for comment.

The list is online at: link.reuters.com/myg77n (Reporting by Susan Heavey; Editing by John Wallace and Richard Chang)

But heart-healthy benefits of the cholesterol drugs outweigh these risks, experts say

Statins, which include the blockbuster drugs Lipitor, Pravachol, Crestor and Zocor, are recommended for patients with high cholesterol. Studies have shown that these drugs are effective in reducing the risk of heart disease and heart attack.

While the drugs have long been linked with a raised risk for muscle problems, the new study involving over 2 million patients found other "potential adverse effects of statins, namely myopathy [muscle problems], acute renal [kidney] failure, liver dysfunction and cataract, and shown that two of these have a dose-response effect," said lead researcher Dr. Julia Hippisley-Cox, professor of clinical epidemiology and general practice at the University of Nottingham.

On the more positive side, the study found no link between statin use and risks for a wide range of cancers (including stomach, colon, lung, renal, breast or prostate malignancies), as well as no connection to Parkinson's disease, rheumatoid arthritis, blood clots, dementia or fractures.

And experts say that, given the drugs' well-known benefit in cutting heart disease risk, the new findings are no reason for patients to shy away from statins.

The report is published in the May 21 online edition of the BMJ. 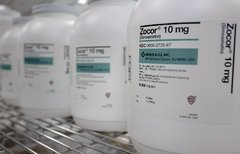 A review of Zocor by the Food and Drug Administration said Merck's cholesterol drug could put some patients at risk of serious muscle injuries when taken at the highest dose.

Merck’s Zocor may put some patients at greater risk for muscle injury when taken at the highest approved dose, U.S. regulators said as part of a review of widely used cholesterol medicines.

The risk of muscle harm includes the most serious form, rhabdomyolysis, the Food and Drug Administration said yesterday in a statement on its website.

The condition can lead to severe kidney damage, kidney failure, and sometimes death.

Zocor, known chemically as simvastatin, is sold in generic form as well.

The drug also is an ingredient in Merck’s Vytorin and Abbott Laboratories’ Simcor. Muscle harm is known to be a possible side effect in other statins, a group that includes Pfizer’s Lipitor, the world’s top-selling drug. The alert followed the examination of a study that focused on Zocor and other data, the FDA said.