NEW YORK (Reuters Health) - Despite some reports of suicide among people taking certain asthma drugs, a new study finds no increased risk of attempted suicide among children and young adults on the medications.

In 2008, the Food and Drug Administration (FDA) said it was investigating reports of mood and behavior changes, suicidal thinking and suicide among people taking asthma medications known as leukotriene modifiers.

The drugs include Singulair (known generically as montelukast), Accolate (zafirlukast) and Zyflo (zileuton).

After reviewing clinical trial data on the drugs, the FDA concluded there was no evidence of a link to suicidal behavior. Still, in 2009 the agency asked manufacturers to add a precaution in the drugs' prescribing instructions about reports of suicide and other psychiatric problems.

But single reports of serious effects among medication users can only hint at a problem.

"Case reports don't prove there actually is an association between a drug and an adverse event, because there are so many other factors that could be at work," said Glen T. Schumock, a professor of pharmacy practice at the University of Illinois at Chicago who led the new study. 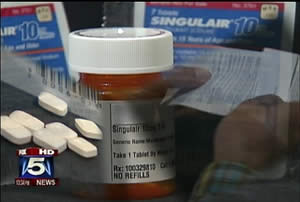 WASHINGTON - Kids so out of control, you can’t take them to church, the movies or even the mall. The problem may not be the kid or even their parents, but instead a popular drug prescribed to millions of kids across the country.

Singulair is drugmaker Merck’s number one selling drug, bringing in $4.6 billion last year. Doctors call it a miracle drug because it keeps kids with severe asthma and allergies out of the emergency room.

But there are a growing number of parents who say the risks associated with the drug could outweigh its benefits.

For kids with asthma, there’s nothing more exciting than running, especially when you’re trying to catch your big sister.

“We thought it was just a normal ‘terrible twos’ kind of thing,” said Willy’s mother Melissa.

She says in the beginning, it was subtle.

“By the time he got to pre-kindergarten, he was pushing children. He was yelling at the teacher. He wasn't sitting still. He wasn't following directions,” said Melissa. “I was literally afraid he was going to be kicked out of school."

Even Willy, who is now five years old, felt something wasn’t right.

“I got really mad at my body,” he said. “I tried to stop my body from doing bad things. I told it to stop, but it kept on doing it.”

When doctors told Melissa her son might have ADHD and might need even more medication, she decided to re-read Singulair’s packaging and discovered side-effects had been added in the years Willy was on the drug. Aggressive behavior, hostility, hallucinations, night-terrors, tremors, irritability, anxiety, depression and even suicide.

After son's suicide, campaign by Queensbury pair leads to warning label on Singulair

OTTAWA — The side-effects of a popular asthma medication that has been sold in Canada for 12 years has been linked to suicide attempts and thoughts of suicide, as well as feelings of depression and hostility.

The July 2009 issue of the Canadian Adverse Reaction Newsletter from Health Canada cites montelukast sodium — which has been marketed in Canada since 1997 as Singulair — as having several connections to the alarming reactions.

Between its introduction to the Canadian market and Jan. 31, 2009, Singulair has been linked to two suicide attempts in Canada and 11 cases where users had thoughts of suicide or self-harm. In 29 other cases, 14 of which were labelled as "serious adverse reactions," those affected suffered from depression, hostility or other psychosis. No deaths have been linked to the drug's side-effects.

Lynne Faraone created this wall of inspiration in her Mentor home. She says hope especially helped her as she fought for a warning label on the asthma and allergy medication Singulair.It's one of the most popular medicines in America -- last year, pharmacists filled about 28 million prescriptions for it.

So chances are good that you or someone you know is taking Singulair.

What you may not know is that hundreds of people taking the allergy and asthma medication have reported frightening side effects, including depression, hallucinations and suicidal thoughts.

That's at least in part because the U.S. Food and Drug Administration recently told the makers of Singulair and three less widely used asthma drugs -- Accolate, Zyflo and Zyflo CR -- that the drugs' labels must list a dozen mood and behavior changes as possible side effects.

When the FDA took that action this month, eight women throughout the United States celebrated.

They'd been pushing for the warning for more than a year. Each of them said she joined the effort after her child's life was turned upside down by the drug.

US FDA asks for caution on Merck asthma drug

US FDA asks for caution on Merck asthma drug

WASHINGTON, June 12 (Reuters) - Merck & Co Inc's Singulair and similar drugs should come with a caution about reports of psychiatric problems in some patients who took the medicines, U.S. regulators said on Friday.

The Food and Drug Administration said it had asked for a precaution on the labels of Singulair, AstraZeneca PLC's Accolate and Cornerstone Therapeutics Inc's Zyflo and Zyflo CR. A precaution is a less serious description than a warning.