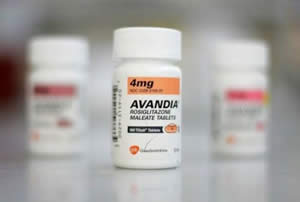 Avandia Patients that have pending litigation in the United Kingdom may not be getting due compensation anytime soon, for those lawsuits against GlaxoSmithKline, (GSK) the manufacturer of the Avandia brand of Rosiglitazone, a diabetes drug discovered to increase risk factors for stroke and heart attacks in diabetics.

A study published in 2007 indicates that Rosiglitazone may increase fatalities from heart disease by as much as 43%.

Products containing Rosiglitazone, like Avandia, were pulled from the market in Europe in September 2010, but continue to be sold in the United States, under specific guidelines put forth by the U.S. FDA.

The European Medicines Agency (EMA) made recommendations in September 2010 that the drug be pulled from the European marketplace, and it is no longer sold there.

According to the FDA, Rosiglitazone may have been responsible for over 100,000 heart attacks in the U.S. alone, with no figure currently available for the U.K. or Europe.

GlaxoSmithKline, (GSK) has admitted to hiding evidence indicating the adverse side effects of Avandia, such as increased risk of heart disease, heart attack, stroke, bone fractures, macular edema, and hepatitis.

Product liability lawsuits in the U.K. are another matter all together.

They may raise risk of macular edema, researchers report

MONDAY, June 11 (HealthDay News) -- British researchers report that thiazolidinediones, diabetes medications that are used to help control blood sugar levels, may cause eye problems in those who take them.

The drugs that fall into this group include Avandia and Actos, which have been tied to increased risk of heart attack in the case of Avandia and bladder cancer in the case of Actos. Now it is possible that these drugs may also cause diabetic macular edema, the study authors said.

"Patients who received a thiazolidinedione were at two- to three-fold increased risk of developing macular edema," said lead researcher Dr. Iskandar Idris, an associate professor in diabetes medicine at the University of Nottingham.

However, the risk of macular edema is very small, about 0.2 percent, so the increased relative risk translates into an absolute risk of less than 1 percent.

In November, U.S. District Judge Cynthia Rufe appointed a mediator to preside over settlement negotiations. She also set a 75-day deadline to resolve 85 percent of the remaining cases. While it was unclear in a court hearing today whether lawyers met the threshold, Rufe called the effort “a major success.”

“Mediation will no longer be the focus of this court’s effort,” Rufe said. “We will resolve the remaining cases through litigation.”

Feb. 1 (Bloomberg) -- GlaxoSmithKline Plc, which is paying $3 billion to resolve government claims that it illegally marketed drugs such as the Avandia diabetes medication, agreed to settle more lawsuits over the pills, a lawyer said.

Glaxo, the U.K.’s biggest drugmaker, agreed last month to resolve more than 20,000 cases alleging Avandia causes heart attacks, said Paul Kiesel, a lawyer for former users. The accord, reached in court-ordered mediation, included a case that was set for trial in state court in Los Angeles, he said.

“We are pleased the mediation has successfully resulted in the settlement of a significant number of the remaining cases,” Kiesel, one of the lead lawyers for plaintiffs in the Avandia litigation, said yesterday in a telephone interview.

GlaxoSmithKline Plc (GSK), which has agreed to pay $3 billion to resolve claims it illegally marketed its Avandia diabetes drug, is facing a judge’s push to resolve most of the remaining patient lawsuits over the medication.

U.S. District Judge Cynthia Rufe said yesterday she appointed a mediator to “preside over settlement negotiations” for an unspecified number of Avandia cases consolidated before her in Philadelphia. Rufe set a 75-day deadline to resolve 85 percent of the remaining cases, according to court filings.

Takeda Pharmaceutical Co.’s Actos, the world’s best-selling diabetes treatment, and GlaxoSmithKline Plc. (GSK)’s Avandia raise the risk of an eye disease that can lead to blindness, a study shows.

People taking the drugs have a 3 to 6 times increased risk of developing diabetic macular edema, a condition in which the retina thickens and swells, according to a study of more than 100,000 people to be presented Sunday at the American Diabetes Association’s annual meeting in San Diego.

“Patients at high risk of sight-threatening DME should avoid” the class of drugs including Actos and Avandia, the study authors, led by Richard Donnelly at the University of Nottingham, wrote in their study abstract. High-risk patients include those who have poor control of their blood sugar and those with a previous history of macular edema.