Raleigh, N.C. — A state Senate committee is considering a proposal that would block lawsuits against pharmaceutical companies over drugs that were approved by the U.S. Food and Drug Administration.

Drugmakers say they need protection from frivolous lawsuits, but doctors and others say the prospect of giving the companies immunity puts profits above people.

"We don't want any other family to have to suffer through something like this," Carolyn Prewitt, whose granddaughter died in 2006 from blood clots in her lungs, said Thursday..

Brittany Prewitt, 15, was taking the drug Yaz to clear up her acne and collapsed while playing catch with her father. The family is suing Bayer, claiming the company suppressed information about dangers associated with Yaz.

Under the proposal being considered by the Pharmaceutical Liability Subcommittee of the Senate, such suits would be barred in North Carolina. The only exception would be for a plaintiff who could prove a pharmaceutical company lied to the FDA to get a drug approved.

Critics of the bill say that's nearly impossible to do.

Four months before a best-selling Alzheimer’s drug was set to lose its patent protection, its makers received approval for a higher dosage that extended their exclusive right to sell the drug. But the higher dosage caused potentially dangerous side effects and worked only slightly better than the existing drugs, according to an article published Thursday in the British Medical Journal. 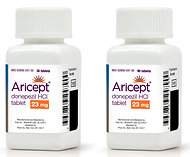 Aricept 23 was developed by the Japanese pharmaceutical company Eisai and is marketed in the United States through a partnership with Pfizer.

They noted that the clinical trial had failed to show that the higher dosage — 23 milligrams versus the previous dosages of 5 and 10 milligrams — met its goals of improving both cognitive and overall functioning in people with moderate to severe Alzheimer’s disease.

The single clinical trial of 1,400 patients also found that the larger dosage led to substantially more nausea and vomiting, potentially dangerous side effects for elderly patients struggling with advanced Alzheimer’s disease. The drug was developed by the Japanese pharmaceutical company Eisai but is marketed in the United States in a partnership with Pfizer.

By Kent Faulk -- The Birmingham News


BIRMINGHAM, Alabama -- A federal judge in north Alabama has set dates for the first two trials to be held in thousands of civil lawsuits filed nationwide against pharmaceutical manufacturer Pfizer Inc. over Chantix, a drug to help people stop smoking.

The two lawsuits also are part of a pool of eight selected by U.S. District Judge Inge Johnson to be bellwether -- or test -- cases in the litigation. Johnson is to preside over those first trials.

Johnson, in a recent order, set the first case for trial on Oct. 22 in a lawsuit originally filed by Duluth, Minn., resident Judy Ann Whitely against Pfizer for the wrongful death of her husband. Mark Alan Whitely began using Chantix on Nov. 20, 2007, and he committed suicide.

As with many of the lawsuits that were filed using a standard form for the Chantix litigation, the Whitely suit does not give any details of Mark Alan Whitely's suicide, whether he had any other problems, or the date of his death. Efforts to reach the attorneys in Minnesota for Whitely were unsuccessful last week.

The next case is set for Jan. 22, 2013. In that case, a representative of the estate of Sandra Corey, of Jacksonville, Ore., is suing Pfizer for wrongful death. That lawsuit claims that Corey began using Chantix on Oct. 2, 2007, and that the drug caused depression and suicide by gunshot on July 24, 2008.

If both the Whitely and Corey cases are tried as scheduled, the third case would be one filed in 2009 by a Demopolis man, Billy Bedsole Jr., who claims he suffered insomnia, severe anxiety, severe depression, erratic behavior, suicidal ideation and hospitalization after taking Chantix.

If the first two cases are settled, dismissed or resolved, then the Bedsole case would be the first case tried, according to Johnson's order.

Brisson defended his sponsorship of the bill on Friday.

“I’m not familiar with this group, but if I sponsored (the bill), it’s a good bill,” Brisson said. “We do have a lot of problems with prescription drugs these days, both in the home and on the streets, but this bill is a good bill.”

Last year, House Bill 542 proposed special protections for drug corporations from being sued by those harmed and even killed by defective and dangerous drugs.

N.C. Attorney General Roy Cooper has warned that pharma immunity “would restrict the tools available to prosecutors and could result in harm to patients and less safe drugs on the market.” In a statement delivered to the General Assembly in 2011, Cooper wrote: “We continue to be concerned that this law could be a loss for taxpayers and consumers. It’s difficult to understand why the legislature would make it harder for North Carolina to take action against drug companies that hurt patients or deceive the government, especially when other states don’t have these obstacles.”

According to liability lawyer Janet Ward Black, who testified recently in front of the state’s Tort Reform Committee, the change would cover everything from drugs to toys to cars.

“Almost every single product, whether it’s manufactured in North Carolina, another state or another country, is affected by this bill,” Black testified. “What it does, basically, is provide immunity — amnesty — for manufacturers of products, as long as some agency was regulating them.”

Takeda, Asia’s biggest drugmaker, may face as many as 10,000 claims that Actos causes bladder cancer after U.S. regulators found last year the drug was linked to the disease. Federal lawsuits against the drugmaker were consolidated before U.S. District Judge Rebecca Doherty in Lafayette, Louisiana, in December. The first hearing on the cases is set for March 22, according to court filings.

“The court has determined to effect the selection of lead counsel, liaison counsel and plaintiffs’ executive and steering committees before the March 22nd-23rd status conference,” Doherty said in a March 12 note posted on the court’s website.

The lawsuits claim patients who use Actos, a prescription drug approved to treat type 2 diabetes, face increased risks of developing bladder cancer. The plaintiffs also claim that Takeda and co-defendant Eli Lilly & Co., based in Indianapolis, withheld information about the risk and failed to provide adequate warnings.

Takeda pulled Actos, its top-selling drug, off the market in Germany and France last year after it was linked to an increased cancer risk. The medication had sales of 387.9 billion yen ($4.8 billion) last fiscal year, 27 percent of the Osaka, Japan-based company’s revenue.

Conventional pharmacotherapies for type 2 diabetes effectively lower blood glucose levels but are associated with side effects that preclude their optimal use or raise safety concerns. Novel treatments based on the endogenous hormone glucagon-like peptide-1 (GLP-1) may overcome some of these obstacles. The GLP-1 receptor agonists, exenatide and liraglutide, have a lower risk of hypoglycaemia than some conventional agents and can provide significant weight loss. Although they can cause gastrointestinal symptoms, effects are transient and can be reduced by gradual dose escalation. No cardiac safety issues have been reported and animal studies suggest that they may confer cardiovascular benefits. Pancreatitis has occurred among patients receiving GLP-1 receptor agonists, but it is unclear whether this is drug-related or due to the increased risk of pancreatitis in type 2 diabetes. Despite findings in rodents that GLP-1 receptor activation of thyroid C-cells results in calcitonin release and C-cell pathology, such effects have not been seen with long-term exposure in humans. Immunogenicity does not appear to be a safety concern. In summary, currently available data indicate that GLP-1 receptor agonists provide an effective and generally well tolerated therapeutic option for the management of type 2 diabetes. 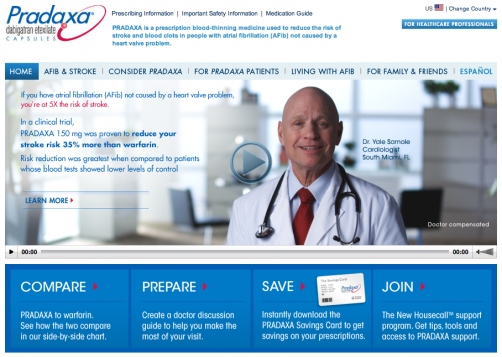 Boehringer Ingelheim has breached the ABPI’s Code of Conduct over the use of its Pradaxa website.

Pradaxa is a new oral blood thinner with several licences to prevent blood clots and reduce the risk of stroke in certain patients.

The GP alleges that because of this, Boehringer Ingelheim “clearly intended to facilitate the promotion of Pradaxa to the public”.

The PMPCA, who monitors adherence to the Code, did not agree that the site was being used to advertise to the public.

It did however, find that Boehringer had breached Clause 4.6 of the Code, because the site was found to be promoting Pradaxa but did not give a clear, prominent statement as to where the prescribing information can be found.

The anonymous GP said that the location of the prescribing information was only clarified after prominent claims for Pradaxa - and the PMCPA agreed.

A U.S. unit of Takeda Pharmaceutical Co. (4502) failed to give accurate reports to regulators about hundreds of congestive heart failure cases associated with its diabetes drug Actos, a whistle-blower claimed in a lawsuit.

The company failed to classify “non-hospitalized or non- fatal” congestive heart failure cases as serious from late 2007 to January 2010, former Takeda medical reviewer Helen Ge said in the complaint in federal court in Boston. Takeda, like other drugmakers, is required to update the U.S. Food and Drug Administration’s Adverse Event Reporting System.

“These events were not properly identified or reported in the FDA’s safety database,” Ge claimed in the complaint, filed in June 2010 and recently unsealed. “Takeda’s motivation to fraudulently report and under-report the serious adverse events was driven by an economic desire to falsely enhance Actos’s safety profile and to increase sales.”

(Reuters) - The death of an elderly man from a massive brain hemorrhage after a routine fall suggests that bleeding complications from Boehringer Ingelheim's Pradaxa blood clot preventer are largely irreversible, according to the Journal of Neurosurgery.

The recently approved drug is the first in a new class of oral medicines called direct thrombin inhibitors, approved to prevent strokes among patients with a dangerous irregular heartbeat called atrial fibrillation that mostly affects the elderly.

U.S. regulators said in December they were evaluating other cases of bleeding associated with the drug, whose chemical name is dabigatran, but advised patients to continue the medicine for now.

Three doctors from the University of Utah monitored and described the worsening condition, and ultimate death, of the 83-year-old man who was evaluated at their medical center for what seemed at first a rather routine fall, according to the report Tuesday in the journal's online edition.

Initially, the patient was fully alert and oriented and could respond to verbal commands, and his neurological exam produced no findings of great concern, the clinicians said.

They said CT scans revealed small, superficial areas of hemorrhage in his brain, but that within two hours after arriving at the hospital new scans showed extensive progression of brain hemorrhaging.

Efforts to stop the hemorrhaging, including intravenous fluids and a protein called recombinant factor VIIa, proved ineffective and the patient fell into a deep coma and died soon afterward, the report said.

"In the event of traumatic hemorrhage in patients receiving dabigatran ... there are currently no effective reversal agents" to neutralize the drug, the report said.